While the majority of the students in my program packed their bags for more distant travels, I decided to spend some quality time with Greece over our extended weekend. Among the coffee, souvlaki, walks,  and brunch with remaining peers, I took a day trip to the ancient site of Corinth. As a big fan of Saint Paul, visiting the places he traveled and spread the gospel are quite near the top of my list of dream destinations while abroad. I already got the chance to stand on the Areospagus where he spoke to the Athenians, but this was my first little solo pilgrimage!

To classify the the success in the realm of transportation as “rough” is a gross understatement. I asked for so many people for help I can’t even count; however thanks to kind people and many Hail Mary’s I somehow made it (eventually) to and from the site. Important note to those traveling to ancient Corinth/traveling in general: If you even have a shred of doubt as to where to get off/any sort of worry,  do yourself a favor and ask for help. Just grow in that humility and do it. Otherwise you will end up in a city about 20 minutes further than your original destination and then have to back-track. Not that that happened to me or anything . . .

Anyway, with the literal “struggle bus” experience aside, let’s move closer to the main point: Saint Paul and ancient Corinth. Like I previously mentioned, I have a special devotion to Saint Paul. Allow me to elaborate a smidgen. One of the many beautiful things about the Catholic Church is that we have hundreds of men and women each with their own unique story and personality who have devoted theirs whole lives to serving God that we can look to for guidance and encouragement. Individual devotions, for me at least, rise up with the feeling of connection to a specific Saint’s writing, life, or patronage; whether out of similarity or differences. Saint Paul made a couple appearances in my life before making his way into my personal litany. The church I attend (and where two of my older siblings frequented while attending UW) in Madison is named after Saint Paul as well as the city where my sister went to college which created a little bond of our family. Then I somehow landed myself int a Religious Studies class about Saint Paul’s letters where I was in way over my head but ended up falling in love with his writing. You can locate his letters in my bible just by finding the page-edges that are the dirtiest from use. Saint Paul lived during the 1st century AD, a Hellenistic world. It is easy to think of the words in the bible as something completely separate from what you learn in history books, but the truth is that they coexist! Not the most revolutionary thought, but it was a realization that blew me away. As a Classics major I read a lot about the ancient Greeks, Constantinople, the rise and fall of the Roman Empire. As a Catholic I read scripture about the Prodigal Son, the life of Christ, the troubles of the citizens in Ephesus and Corinth. But for some reason I had never really tried to work the two loves of my life together by putting them in context. I began looking at Saint Paul as Hellenistic man living as an early Christian and since then he has been dear to my heart not only as a Saint but as a symbol of the marriage between my studies and my faith.

As my hope of reaching my destination decreased with my lost-ness increasing (an unfortunate inverse relationship), I arrived much to my surprise. My tear-lined eyes finally landed on the site of ancient Corinth and I released a sigh mixed with relief, peace, and wonder coming straight from my heart rather than my lungs. I made it. It was a rainy day so, as expected, I had the site almost to myself which was lovely. I did not expect, however, to be greeted by a very nearby school blasting jams including the Macarana and La Bamba. Happy Carnival?

The site has a long history and includes many constructions (stores, stoas, statues, etc) but I will only mention a few. 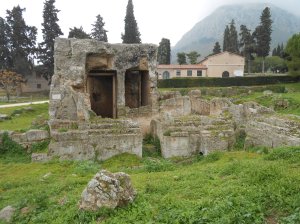 First you are greeted with the Fountain of Glauke. This is a large limestone block that had four reservoirs for the water but was not a natural spring. It was originally built in the 6th century BC and has a little myth to go with it! Story time. Glauke was a princess of Corinth who was promised in marriage to a hero, Jason, who also happened to be married already to a sorceress. Medea was less than thrilled about being tossed aside and poisoned Glauke’s wedding dress, causing her to burst into flames. In effort to extinguish the flames, it is said that she threw herself into this fountain. It didn’t work. Medea followed up that gruesome act with the murder of Glauke’s father and her two children then exited the scene on her dragon-drawn chariot. 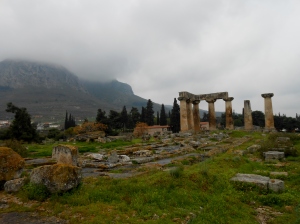 Next is the Temple of Apollo.  An archaic temple built in the 6th century BC with it’s strangely majestic monolithic (“one stone”) columns is the most prominent in the site. Of course it was altered from it’s original state over time, especially when the Romans gained occupation. Let’s just give a brief shout out to Pausanias who wandered around and documented a bunch of monuments in the 2nd century AD.

The Bema or Rostra

Now for my main attraction: the Bema. This is the place where Saint Paul would have proclaimed the Gospel to the citizens of Corinth. Wow. Even though a worker thought I was a crazy person as he watched my like a hawk as I inspected this monument, I took my time. It is a raised marble platform that was probably close to brand spanking new when Saint Paul stood on it. A gift from God came in the form of a school bell ringing releasing the children from school and ceasing the crazy music.

To my great delight, I was surprised to find that you could actually walk on top of it! Saint Paul didn’t wear socks and even if he did I doubt that they would have had Christmas pigs on them, but I felt it was appropriate to document my dream moment of standing where he stood.

“In the footsteps of Saint Paul”

When the brief moment of shock passed, I joyfully found a place to sit on top and settled in and flipped open my Interlinear Greek-English New Testament to read some of Saint Paul’s letters to the Corinthians. It was so beautiful to picture the city as it was and imagine these letters being read to the public in Paul’s absence.

I then headed into the museum to see the numerous artifacts belonging to the site. After having my fill of beautiful sculptures, mosaics, and pottery (of course) I headed back out to pray my rosary. Two decades in I realize that I am being yelled at in Greek to leave because they were closing. Or at least that’s what I assume she was saying based on purely context clues and the close to zero Greek that I know.

Although I would have preferred to make a real pilgrimage to Corinth, setting out with nothing but sandals and a walking stick, as Saint Paul did, my bus/metro/taxi adventure was a pretty crazy journey within itself. I am so thankful to have made it to Corinth on my mini retreat; growing a little closer to God with the aide of my friend Saint Paul.

“But he said to me, ‘My grace is sufficient for you, for my power is made perfect in weakness.’ Therefore I will boast all the more gladly about my weaknesses, so that Christ’s power may rest on me. That is why, for Christ’s sake, I delight in weaknesses, in insults, in hardships, in persecutions, in difficulties. For when I am weak, then I am strong.” – 2Corinthians 12:9-10

Emily in a nutshell:

For better or worse, I choose to approach every situation as an adventure with little information, zero expectations, and a whole lot of Faith.

“The World is a book, and those who do not travel read only a page.” – Saint Augustine of Hippo 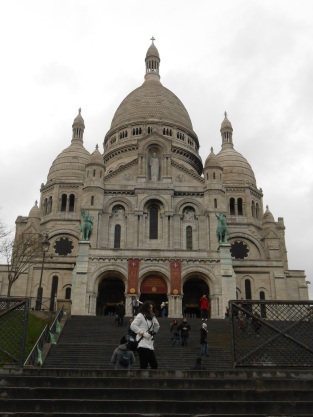 One of the three sections of the Erechtheion. Very uncharacteristic for a Classical temple. also, note the olive tree. 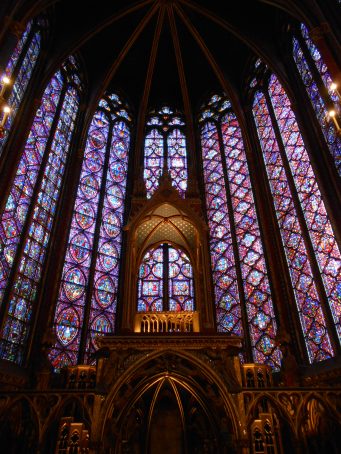 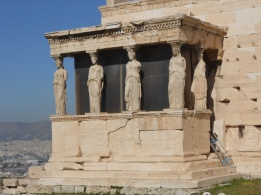 Can’t not have a picture of those fine caryatids. 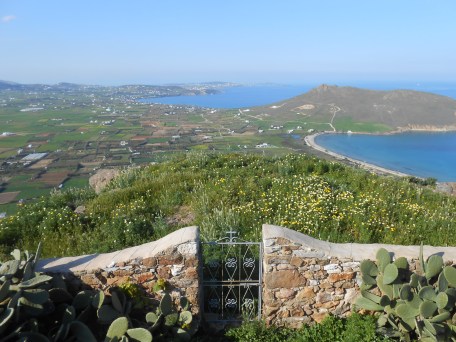 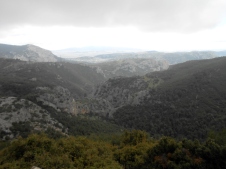 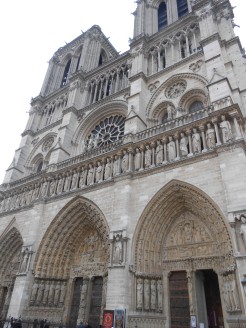 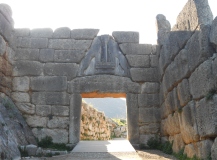 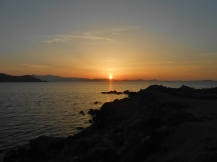 Our little courtyard with the Palamidi Castle in the background. 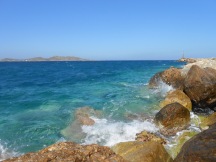 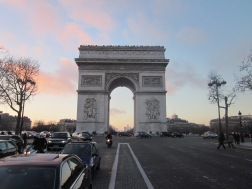 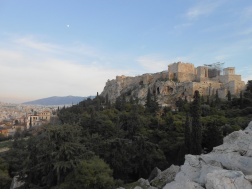 The Acropolis from the Areopagus Hill.